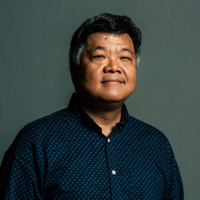 Tim has been the Pacific Area Director for InterVarsity Christian Fellowship’s Graduate and Faculty Ministries (GFM) since the beginning of 2018. The area includes colleges and universities in Northern California, Hawaii, and Northern Nevada. Through GFM, Tim hopes to cultivate a new generation of transformative Christian leaders who will become positive and redemptive influences in the Church and the world.

Prior to working with InterVarsity, Tim was the Pastor of English Ministries at Canaan Taiwanese Christian Church in San Jose (2010-2017). He was also a professor of American Religious History at Denver Seminary, Colgate Rochester Divinity School, and the American Baptist Seminary of the West (Graduate Theological Union) between 1994 and 2006. In 2005, I started the Institute for the Study of Asian American Christianity (ISAAC) and was its Executive Director until 2012.

I received my call to ministry at Urbana ’81 and was ordained by the American Baptist Churches, USA. I earned an M.Div. and Ph.D. in the History of Christianity at Union Theological Seminary (NY) in 1994.

My life mission has been to enhance Christian witness to God’s love through research, teaching, and ministry leader support. I’ve lectured, led workshops, and published in the areas of Chinese American Christianity, Asian American studies, evangelicalism, the social gospel, the history of Christianity, and race in American history.

I also volunteer for the Healthy Church Leaders Initiative of the Asian American Leadership Center, a ministry that supports professional church leaders who serve in Asian American contexts through Peer Coaching, continuing education, and encouraging young pastors. I’m also an Affiliate for the Asian American Center at Fuller Theological Seminary.
​
My wife, Betty, and I grew up in New York City. She was born in Hong Kong and migrated to the U.S. when she was eight years old. I was born in Taiwan and migrated when I was two. We met at New York University vis-a-vis InterVarsity's Chinese Christian Fellowship and have been married since 1985. We’ve lived in the SF Bay Area since 2000. We have two adult sons: Nathaniel and Benjamin.
SUPPORT TIM