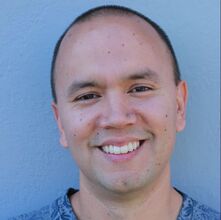 Dan was born in Honolulu and grew up in Hawai'i, DR Congo, Nepal and the Philippines as the child of medical missionaries. His great great grandfather immigrated to Hawai'i from China in 1886 despite the Chinese Exclusion Act. Dan is currently writing a book about how to cultivate a healthier evangelicalism, releasing in 2021 from InterVarsity Press. He's previously written for Inheritance, Missio Alliance, and contributed a chapter to the book, Father Factor (White Cloud Press).
​
When he's trying not to be so serious, Dan enjoys playing basketball, collecting baseball cards and strumming simple songs on his tenor ukulele. Dan's wife Rebecca is the lead pastor at Wellspring. They live in Honolulu with their two sons, ages 13 and 7. Prior to joining IV staff in 2016, Dan was a pastor and social worker in Hawai'i. You can follow him on Twitter @StringerDan
Links:
SUPPORT DAN