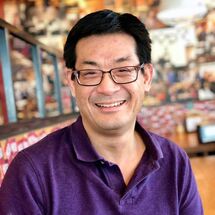 Howard joins the GFM Pacific Area after serving as a volunteer staff with the IV Grad Group at U.C. Davis for two years. He is an ordained minister who comes from pastoring in local ethnic Chinese churches in California, most recently at Davis Chinese Christian Church (Davis, CA). Howard received his Master of Divinity from Western Seminary (San Jose, CA) and Doctor of Ministry from Fuller Seminary (Pasadena, CA) where he wrote his doctoral project titled, “Mentoring Leaders for Kingdom Ministry.” His passion in ministry reflects his studies: to equip Kingdom-minded leaders through personal mentoring and team building.

Howard is also an active patient health advocate and blogger motivated by empowering and inspiring those living with chronic illness to thrive emotionally and spiritually. He draws from his experience living with severe psoriasis, a chronic autoimmune skin disease, since childhood. His award-winning column, The Itch to Beat Psoriasis, has been hosted by Everyday Health since 2007. He volunteers for the National Psoriasis Foundation having advocated for patient concerns to legislators in Sacramento, CA and Washington D.C. WEGO Health, a patient leader network, named Howard to their Top 10 List: 2018 Lifetime Achievement Award in recognition of his advocacy work.
​
Howard met his wife, Lori, at the U.C. Davis InterVarsity chapter. They also confirmed their calling to full-time ministry while pursuing God’s direction together in college. Howard and Lori celebrated their twenty-fifth anniversary last year and have three children in college. Both have roots in the Bay Area and enjoy following the S.F. Giants and San Jose Sharks from their home in the Davis/Sacramento area.
SUPPORT HOWARD